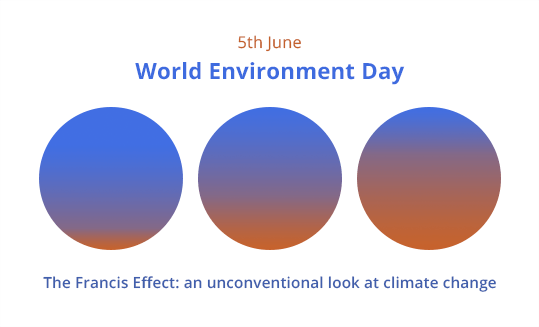 It’s ludicrous how an impending disaster that puts 7.3 billion people at risk, the largest of its kind, is treated more as a myth by people than anything else. Climate change despite strong scientific backing has a hard time being taken seriously. It’s a polarising and absurdly even a partisan issue in some developed countries. But perhaps the greatest danger of climate change is its sheer lack of credibility to hold debate even in the highest forums.

In 2015 Dr. Virabadran Ramanathan, an atmospheric scientist had convinced the Vatican to let him have a 3-minute audience with the pope outside his residence. It was quite literally a parking lot pitch. To save time, he memorized a monologue in Spanish to explain the dangers of climate change but as the car pulled over and the greatest religious leader of the world stepped out, he blanked out. Not a word of Spanish came to him, so he resorted to a translator and got straight to the heart of the issue. He told the Pope that the richest 1 billion were causing more pollution than the rest of the world and that poorest 3 billion are going to suffer the brunt of the consequences. Even though they had contributed little to the issue. The pope listened to the scientist and asked what he could do to help. This was not how Dr. Ramanathan had thought it would go. He told the pope that climate change was a moral issue and that as the moral leader of the world he must urge the world to be better stewards of the planet. The pope was rather quite convinced, he mentioned this message in his letters to the Catholic world but more importantly, he tweeted it to his 40 million followers.

We must never forget that the natural environment is a collective good, the patrimony of all humanity and the responsibility of everyone.

That one act of changing the lens through which we see the issue from a scientific to a humanitarian paradigm and propagating the message through something as mundane as a tweet had the most profound impacts. Almost half of all Americans had heard of the Pope’s message, 1 in 10 Americans had it discussed in their place of worship and 17% of Americans had gained a better understanding of the issue. This phenomenon was called as the Francis effect.

Graphs and data do little to persuade people. To have people deliberate on an issue, the issue must first permeate the ethos of their society. The differentiating factor between climate change and other issues is that climate change has its cause(pollution, waste, etc.) more detached from its effect(population displacement, loss of habitat, water shortage, etc.). Therefore, a hole in the ozone layer doesn’t intuitively translate into a humanitarian issue. Scientific papers cannot change what a society considers as their ethical responsibilities and do not reflect on the humanitarian issue that climate change will create. At the crux of it, climate change is an impending humanitarian disaster and one tweet from the Pope made us the world populus a more socially and ethically aware than decades of scientific reports or research.

One of the penalties for refusing to participate in politics is that you end up being governed by your inferiors.